Six Songs of Me

I was planning to blog this week about next year’s BlueLightCamp, which is coming up in April 2013*. However, I looked at the Weekly Blog Club timeline and got distracted by blog posts by Kate Bentham, Janet Davis and Louise Brown entitled: Six Songs of Me. It seems it all stems from The Guardian’s Six Songs of Life. I couldn’t resist and I’ve had a go at my own list below:

1. What was the first song you ever bought? 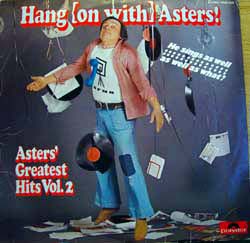 The first album I remember buying

In the 1970s I was one of thousands of British Forces dependants living in Germany where my dad was stationed. BFBS (the British Forces Broadcasting Service) was a real lifeline for families whilst the soldiers were away.

The first record I remember buying was a BFBS compilation album called ‘Hang on with Asters!’ ‘Asters’ was a DJ called Richard Astbury who sang a couple of the songs on the album. I’m pleased to see he’s still going strong.

Apart from Asters’ own work (which included ‘The Drinking Man’s diet’), the only song I remember the title of was ‘The Square Bashing Dance’, by Bill Oddie.

2. What song always gets you dancing?

Is there a song called ‘Several large glasses of red’? No? Well, there should be. I can’t dance and the only way I’m going to even attempt it in public is after at least several glasses of Shiraz.

If really pushed, I’d pick ‘Let’s Dance’ by David Bowie, as that reminds me of happy days attempting to learn French during a stay in France when I was in my teens.

Thinking of that time reminds me of other songs I tried dancing which such as: ‘Happy Talk’ by Captain Sensible, ‘The Safety Dance’ by Men without Hats, and anything by Bad Manners (If you haven’t heard it, their version of Teddy Bears’ Picnic is brilliantly subversive).

3. What song takes you back to your childhood?

I have two brothers, both of whom are older than me. I grew up listening to what they listened to, so a mixture of Beatles, Rolling Stones, and Wishbone Ash, all of which I still enjoy.

One of my favourite albums is Argus by Wishbone Ash. I used to stare at the cover for hours on end thinking about the Warrior and wondering about the flying saucer. Most memorable track on the album for me is probably ‘The King Will Come’.

One last childhood memory. Every time I hear ‘Obla di, obla da’ by the Beatles I think of cheese on toast. Pavlov anyone?

4. What is your perfect love song?

I’m a hopeless unromantic (it probably goes with not dancing), and struggle to give a decent answer.

I’ll therefore reinterpret the question and refer to the peace and goodwill to all mankind kind of love instead.

5. What song would you want at your funeral?

These questions are getting increasingly difficult to answer. I’m not sure if it’s my serious answer, but in an attempt to be clever, I’ll choose ‘Flowers and Silence’ from the Sneaker Pimps’ Splinter album.

The album: Splinter by the Sneaker Pimps

Surely I can pick more than one, if it’s my funeral? In which case, at the other end of the spectrum, I’ll go for ‘After You’ve Gone’ Honky Tonk Piano by Mickey Finn and Big Tiny Little.

I’ll also have, ‘Going Underground’ by The Jam, and ‘Goodby Cruel World’ by Pink Floyd.

It’s no good, the more I think about it, the longer the playlist. I could’t possibly depart without ‘Heaven’ by Talking Heads. Perhaps I could just keep adding tracks and never actually go – people at the funeral would probably just wander off after a while, bored.

6. One last song that makes you, you.

It’s taken me ages to get this far. I had hoped to carry on and try and respond to some of Janet Davis’ questions from The songs of me part 2 . I think I’ll have a go at that at the weekend instead. If you haven’t seen Janet’s list, here it is:

Janet’s Songs of me part 2

1a) What song brings back memories of homework?

I’m interested in lots of things, in no particular order: society, politics, public services, open data, technology (and what you can do with it), wildlife, photography, the countryside, and long distance walking.
View all posts by Mark Braggins →
This entry was posted in weekly blog club and tagged music, songs. Bookmark the permalink.

5 Responses to Six Songs of Me