The story so far

In my previous post I explained that the Hampshire Hub has been through a few changes, starting life as a ‘thinking aloud’ web site, then regenerating as a ‘prototype’, and most recently what we’ve been calling ‘interim’.

Up to this point we’ve been developing the site ourselves using WordPress, with a bit of help and advice from friends. We’ve tried not to be precious about it being ‘our’ design, and we’re doing our best to incorporate your feedback and suggestions along the way.

We have shared ‘some’ open data so far, mostly as Excel workbooks based on data packs from OCSI, together with some spatial and other data from the councils, but we’ve never pretended it was a ‘proper’ data store – we recognise that’s not where our strengths lie.

Towards the end of 2013 – having thought carefully about our requirements we went in to ‘procurement mode’ to obtain a really good, versatile, data store. I previously shared the questionnaire which informed potential suppliers, and helped us work out who to invite to formally submit a tender.

We then drew up a detailed Invitation to Tender (ITT) which we shared with those suppliers who had previously qualified to bid. That document is commercially sensitive, so I can’t share it here. Basically, we were looking for a platform that lets us to share lots of data (and other content), and lets you get at the data in various ways, but also enables us to adapt as we go along to meet changing needs.

We received several proposals – all of which were very good in their own right – which our evaluation team reviewed against the criteria set out in the Tender.

Despite strong competition, there was a clear winner, and I’m really pleased to say that we’re appointing Swirrl – the linked data specialists – to provide the strategic Hampshire Hub, using their PublishMyData platform. 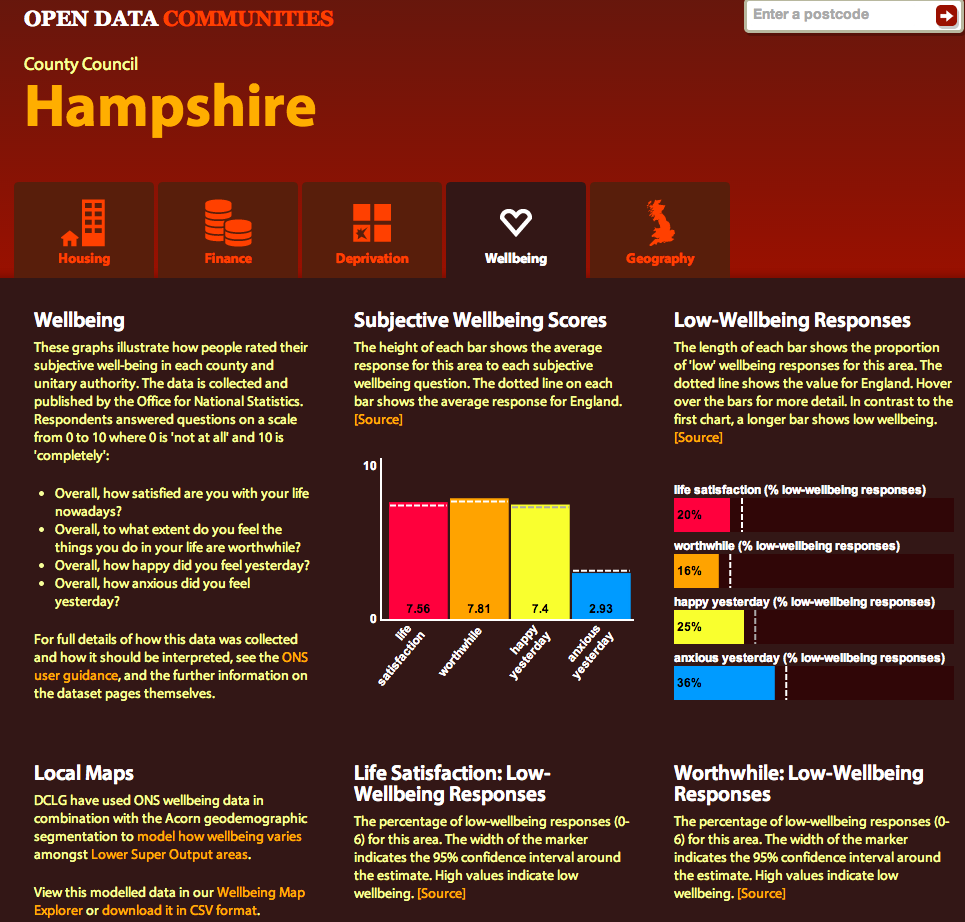 You might have seen some of Swirrl’s existing work over on the DCLG’s Open Data Communities web site, where they’ve created various applications like the Local Authority Dashboard (pictured). Quite a few other applications have been created using data published by the DCLG, with some great examples on Steve Peters’ Open Data Blog.

Swirrl already has an amazing platform, providing a solid foundation on which to build the new Hampshire Hub. Swirrl is also creating a range of new functionality specifically for Hampshire, which will be delivered in the coming months.

This is the first of many posts telling you about the new Hampshire Hub. We intend to continue in the same vein as before, sharing ideas and early versions of new functionality, and asking for your feedback.